Two post-conference field trips will be arranged, starting on Saturday, August 27 2022. To register for participation please go to the registration page: 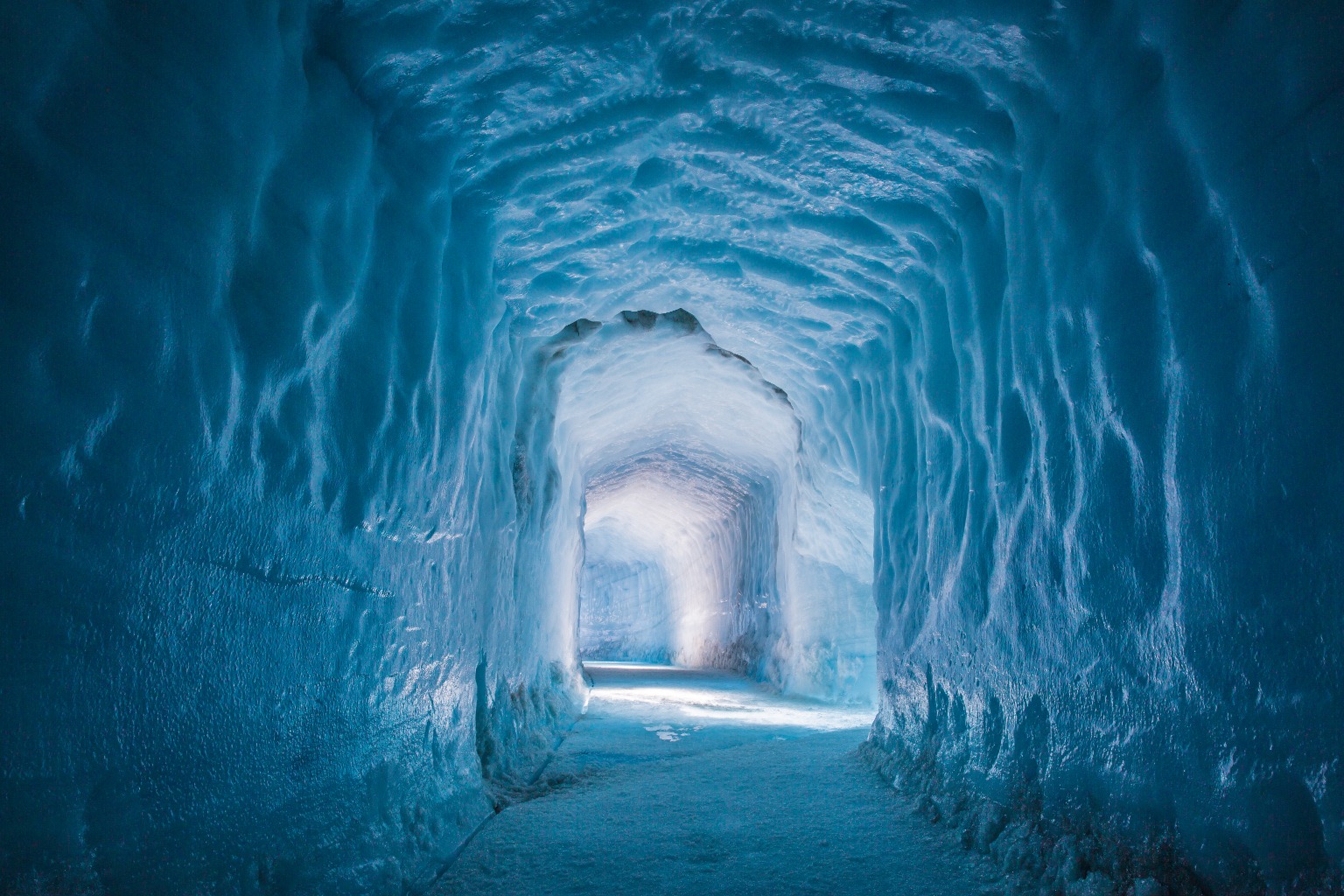 Starting out from Reykjavík, the route first passes by Mt. Esja, displaying evidence for past landslides. After driving through a tunnel beneath Hvalfjörður (Whale Fjord) the Borgarfjörður region in W-Iceland is entered. The first stop will be made at Reykholt, one of the most important historical sites in Iceland, seat of the 13th century chieftain and saga writer Snorri Sturluson. Visit to Snorri’s hot pool, Snorralaug. In good visibility volcanic formations on the Western Volcanic Zone come into view during the drive through the Borgarfjörður region: The shield volcano Ok was capped by a small glacier until 2014 when it received an official “death certificate”. The dome shaped Eiríksjökull ice cap is also visible to the east, situated on top of a large subglacially erupted tuya (table mountain), the largest in Iceland (volume: 50 km3). At Húsafell, a lecture will be given, with focus on glaciers and glacier changes in Iceland. After lunch, a visit will be made to Langjökull, the second largest ice cap in Iceland. Participants will enter a 400 m long tunnel dug a few years ago, located above the equilibrium line on the glacier. The transformation of snow to firn and ice can be viewed in the layered walls of the tunnel. Explanations will be given in a small lecture hall inside the tunnel system.

If time allows, a stop will be made on the way back at Hraunfossar, where groundwater emerges in small streams from beneath an 1100 year old lava flow (Hallmundarhraun) and flows into the river Hvítá in a beautiful network of small waterfalls.

Clothing: Waterproof clothing is essential, as well as waterproof footwear.

Warm clothing will be provided before driving a few km up-glacier to the tunnel. 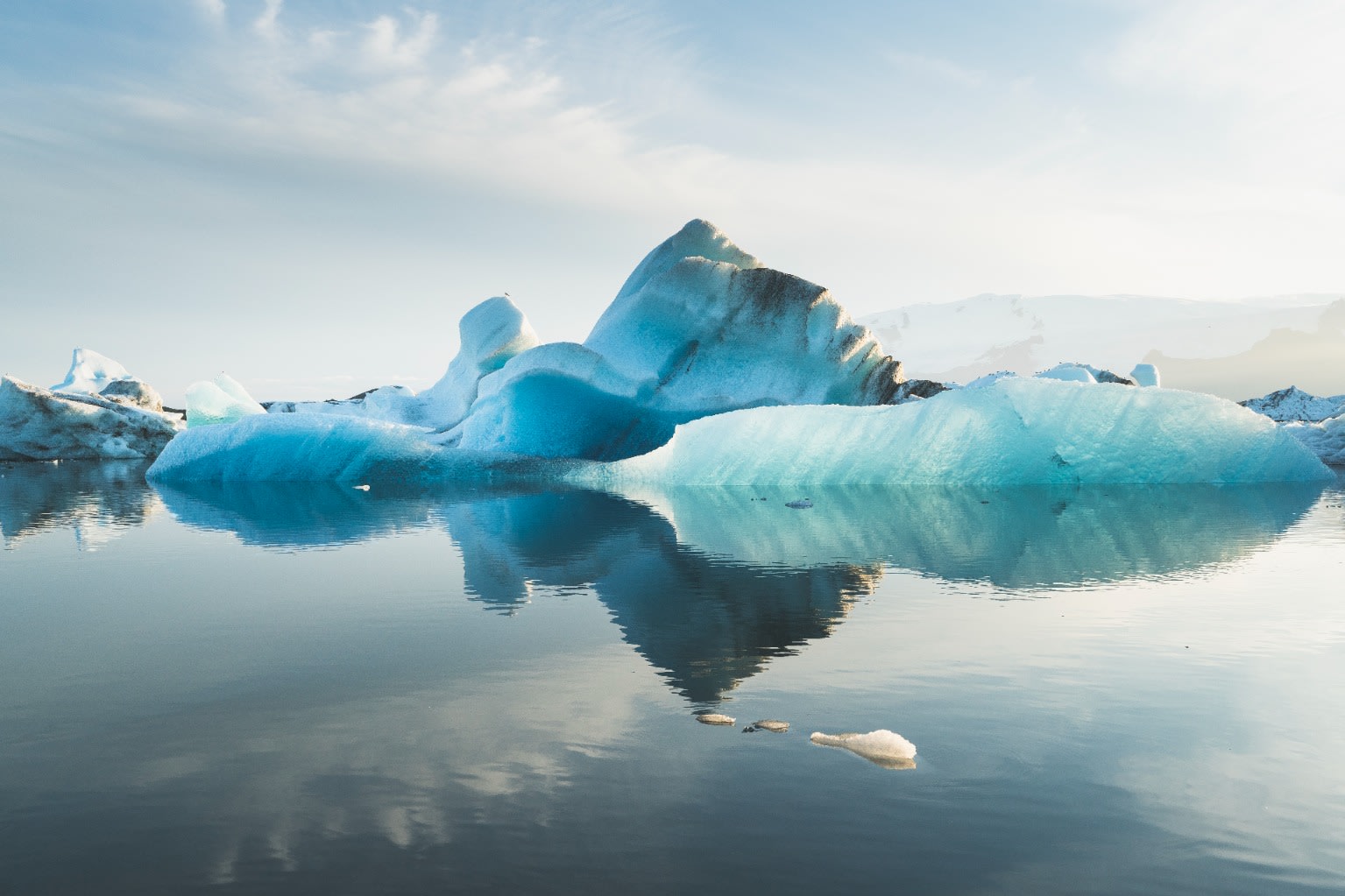 Three-day excursion in the South of Iceland

Day 1: Travel from Reykjavík to the town of Hvolsvöllur, where the Lava Centre will be visited. The route continues beneath the volcano Eyjafjallajökull, which erupted in 2010, causing a weeklong disruption of international air traffic. Stops at the waterfall Skógafoss and at Hjörleifshöfði, a promontory formed in a subglacial eruption. View towards the subglacial volcano Katla and the Mýrdalssandur plains, onto which the enormous jökulhlaups (glacier outburst floods) descend during Katla eruptions. The route continues eastward through the lava that flowed during the Skaftáreldar (or Laki) eruption in 1783. This eruption caused devastation in Iceland, led to cooling of Northern Hemisphere climate for a few years and to crop failures in Europe and other regions. After driving through the Skeiðarársandur plains south of the Vatnajökull ice cap, the group arrives at a hotel located beneath the highest mountain in Iceland, the ice-capped volcano Öræfajökull.

Day 2: Visit to Kvíárjökull, a retreating glacier confined by huge moraines that descends from the plateau of Öræfajökull. Visit to Jökulsárlón (The Glacier Lagoon) in front of Breiðamerkurjökull. This proglacial lake has been forming since the 1930s due to steady retreat of the glacier. Boat trip on the lagoon to view icebergs that have calved from the glacier front. Drive to the town of Höfn. Return to the hotel with a stop in front of the outlet glacier Hoffellsjökull, where the first measurements of glacier mass balance in Iceland were carried out by Icelandic and Swedish scientists in the years 1936−1938.

Day 3: A morning in Skaftafell, which now forms part of the Vatnajökull National Park. Hike to the waterfall Svartifoss and to the viewpoint Sjónarsker. View over the sandur plains in front of Skeiðarárjökull, which have throughout historical time been inundated by huge jökulhlaups (glacier outburst floods) originating in the subglacial volcano Grímsvötn. Stop at Dverghamrar, a site where beautiful columnar basalt can be viewed. Stops at Dyrhólaey, the southernmost point of Iceland and at the waterfall Seljalandsfoss. Arrival in Reykjavík at 19:00 in the evening. 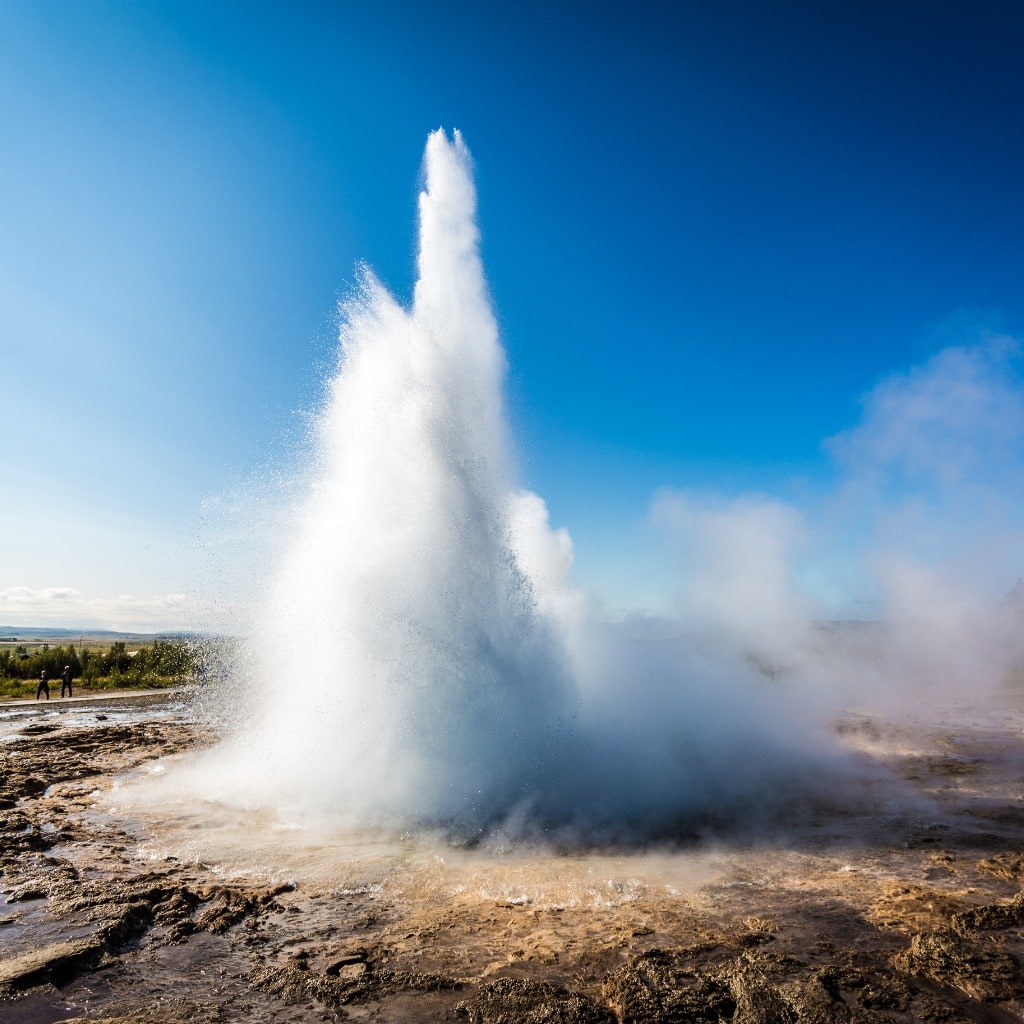 This classic tour is suitable for those who have not visited Iceland before. The Þingvellir (Thingvellir) National Park is a site of unique historic and geological interest. It was here that the Viking settlers in Iceland decided, in 930 AD, to establish their parliament, which convened every year during mid-summer. Many scenes detailed in the 13th century Icelandic Sagas, which mainly describe 10th century events, took place at Þingvellir. The rift valley at Þingvellir forms part of the main rift zone passing through Central Iceland, separating the N-American and Eurasian tectonic plates. Evidence of subglacial and subaerial volcanism is also abundant in the region.

The waterfall Gullfoss is one of the most scenic locations in Iceland. The two-step waterfall on the glacial river Hvítá has a total drop of 32 m. It is situated within a 2500 m long and up to 70 m deep gorge, which may have been formed in a catastrophic flood at the end of the ice age, released from a proglacial lake in front of the retreating Weichselian ice sheet.

Geysir is the site of the hot spring that has given name to all the world´s geysers. The Great Geysir frequently erupted in the 19th century to heights of 70 m but is now mostly dormant. The geyser named Strokkur erupts faithfully to 20−30 m every 8−10 minutes.

This tour ends with a dinner at a countryside restaurant. Arrival in Reykjavík late in the evening.

The tour should be suitable for anyone and walking distances are short.

Warm, waterproof clothing is needed but hiking boots are not necessary. 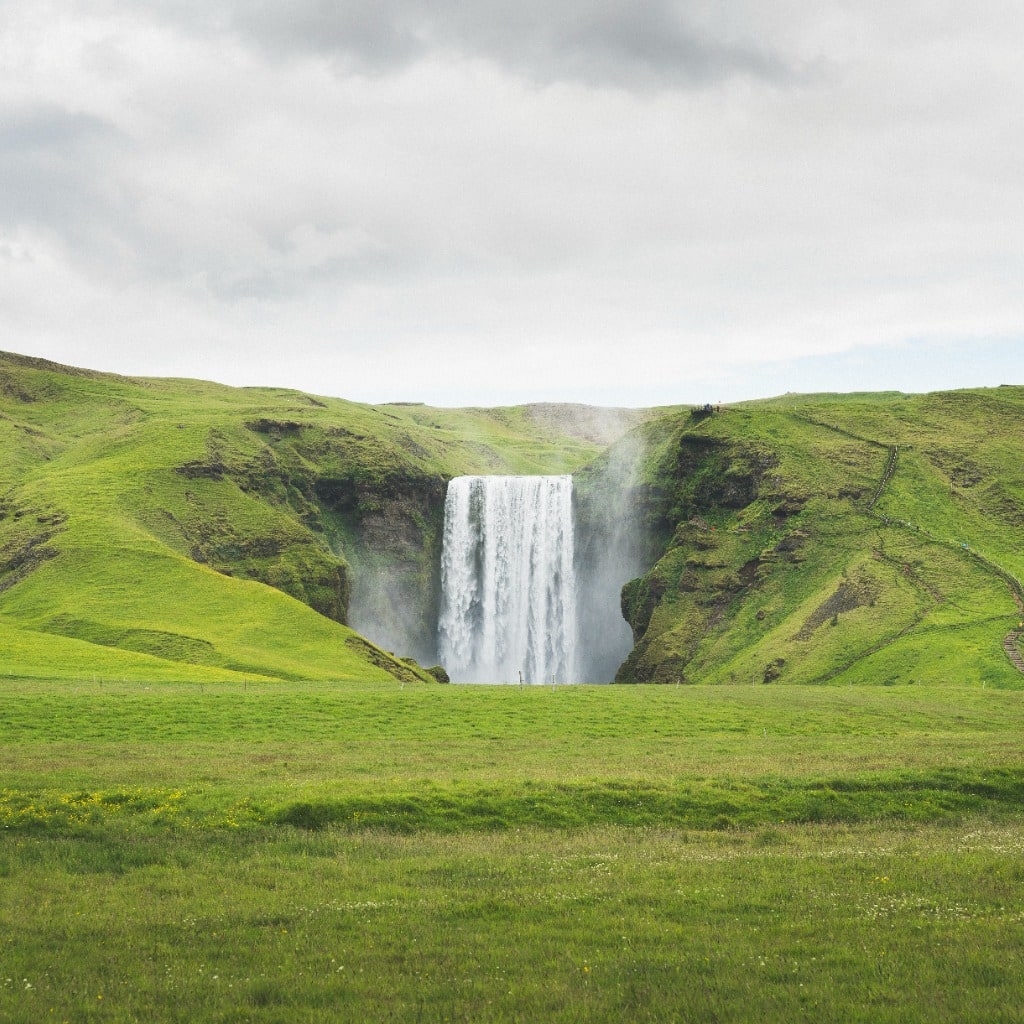 Sólheimajökull is a 15 km long and 1.5 km wide outlet glacier flowing from the Mýrdalsjökull ice cap, descending from an elevation of 1300 m down to 200 m above sea level. Mýrdalsjökull is a 500 km2 ice cap that receives very high precipitation, often up to 12 m of snowfall during the winter (i.e. 6 m water equivalent). Variations of the glacier front have been monitored annually since 1930 and glacial geology studies have documented the ages of different moraines in the glacier foreland. The glacier has retreated rapidly since 1995 and a proglacial lake has formed at the front. The Mýrdalsjökull ice cap hosts a large ice-filled caldera, where the subglacial volcano Katla lurks underneath. Katla eruptions cause enormous jökulhlaups (glacier outburst floods) onto the lowlands surrounding the ice cap, typically to the Mýrdalssandur plains to the southeast. On average, Katla has erupted twice a century during historical time in Iceland (AD 900−2000) and since the last eruption occurred in 1918, signs of unrest in the volcano are being carefully monitored. Smaller jökulhlaups have occurred in recent years, due to ice melting above subglacial geothermal areas.The nearby Eyjafjallajökull volcano, which erupted in 2010, caused widespread disruption to international air traffic.

In addition to a stop at the waterfall Skógafoss, this tour will include a hike on Sólheimajökull, led by a professional glacier guide. After dinner at a countryside restaurant, the group will return to Reykjavík late in the evening.

Crampons will be provided, but participants must bring their own sturdy outdoor shoes or hiking boots. Warm, waterproof clothing is needed. 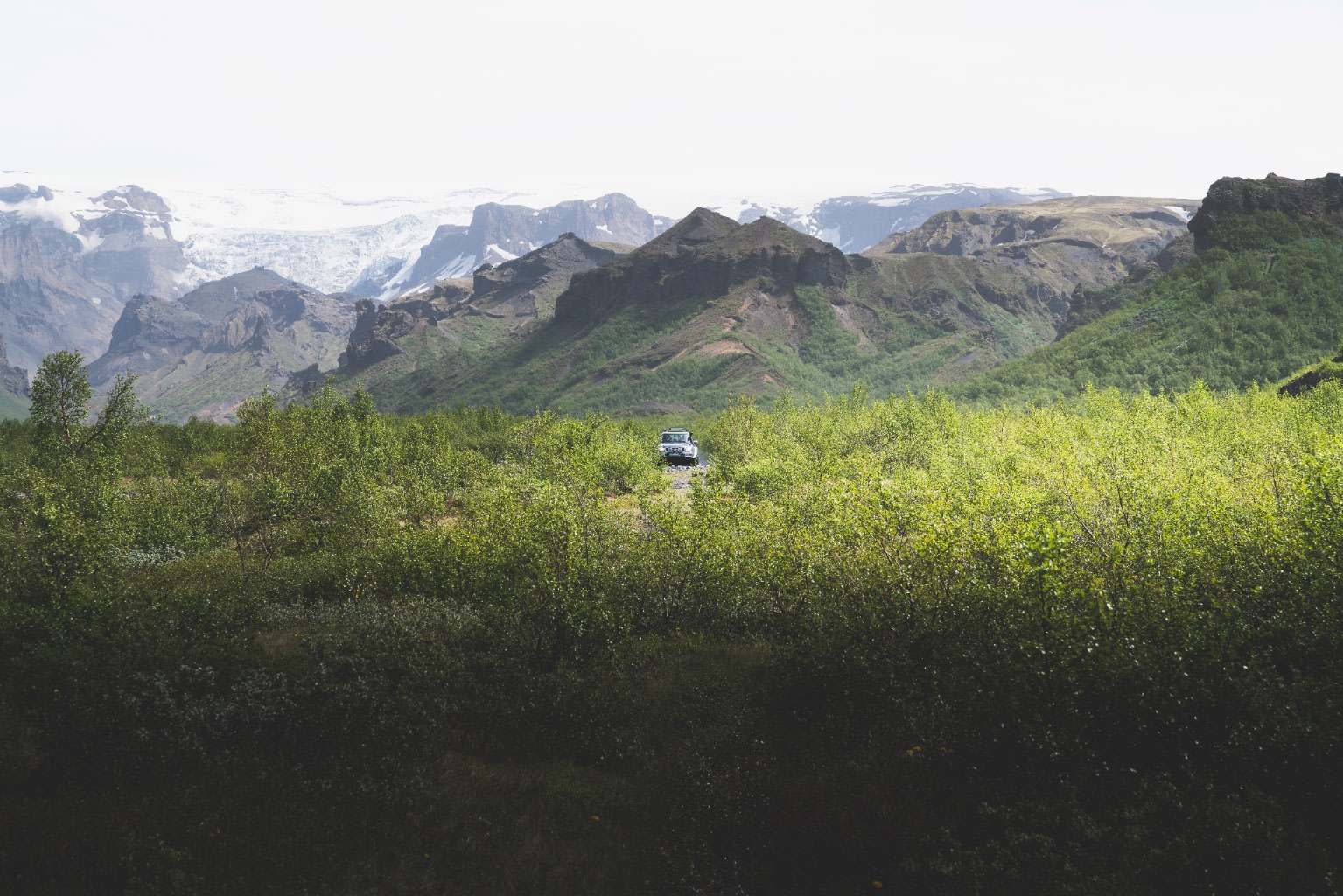 Tour 3: Steinsholt valley – The scene of a flash flood

Located beneath the northern slopes of Mt. Eyjafjallajökull, Steinsholtsdalur is a glacier-carved valley where evidence of a major flash flood that occurred in January 1967 can still be observed. The flood was caused by a huge rockslide that fell onto the glacier and descended into a proglacial lake. Huge boulders were transported several km downstream by the flood. The group will first visit the Gígjökull glacier that descends down the slopes of Eyjafjallajökull. The eruption in the ice-filled summit crater in 2010 caused downglacier flow of sediment-laden water, which entered the Markarfljót river and flowed to the ocean with a maximum discharge of 2500 m3/s. After walking 3 km through the Steinsholt valley, participants will ascend to an elevation of 500 m on Mt. Rjúpnafell, from which the site of the rockfall is clearly visible. From there, the group will descend into the Stakkholtsgjá gorge, carved into hyaloclastite rock (móberg). The tour will end with a barbecue in the scenic Þórsmörk valley, surrounded by glaciers on 3 sides. Arrival in Reykjavík late in the evening.

This tour is only suitable for people in good physical condition.

Hiking boots and warm, waterproof clothing is a prerequisite for participating. 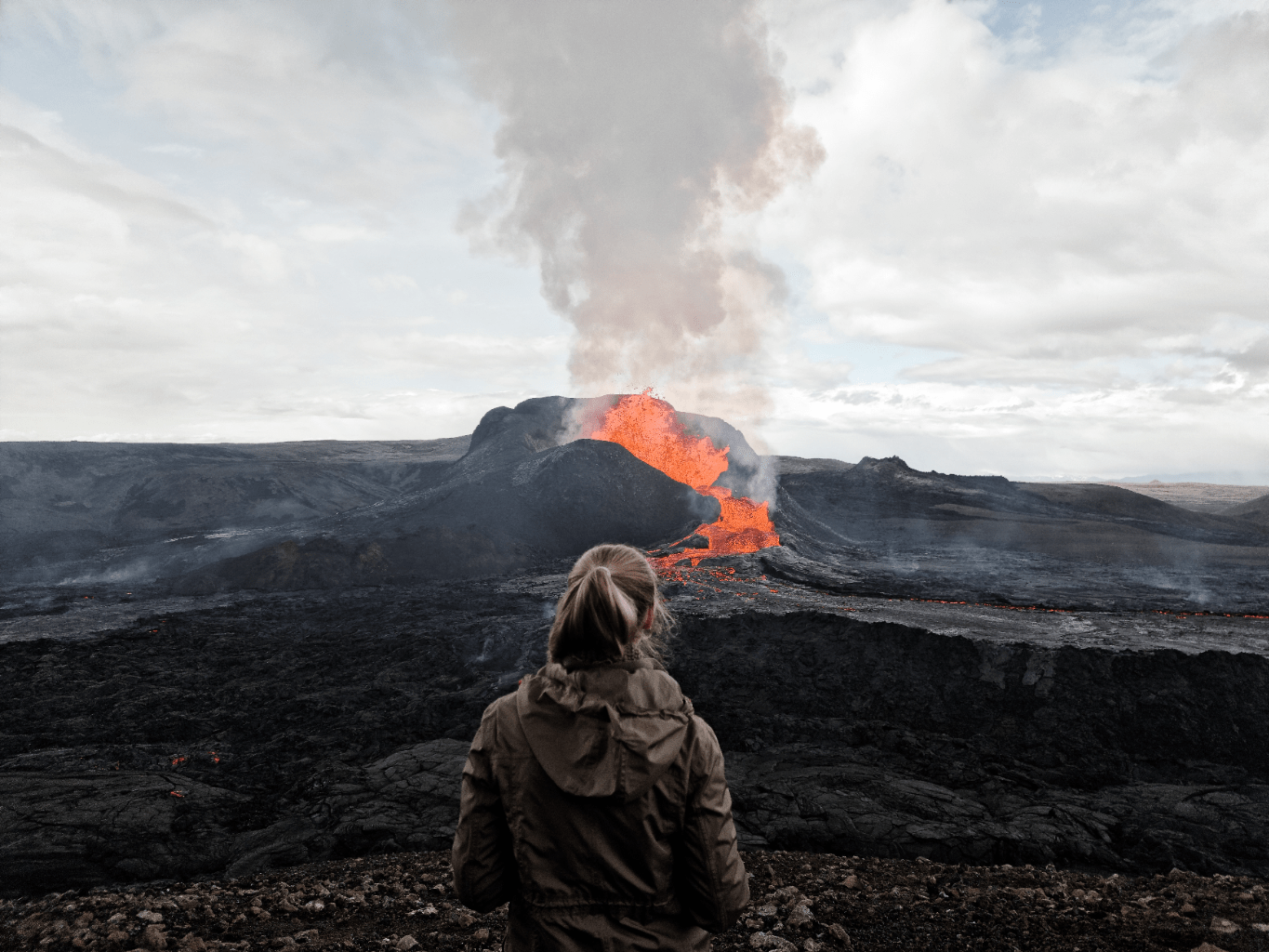 Tour 4: Fagradalsfjall – Site of the 2021 eruption near Reykjavík

UPDATE August 15 2022: Volcanic activity at Fagradalsfjall started anew on 3 August, after being dormant for nearly a year. Participants in this excursion will have an opportunity to view the ongoing eruption, if weather conditions allow. Updates on the eruption are posted at: https://en.vedur.is/

On 19 March 2021, a volcanic eruption started by Fagradalsfjall on the Reykjanes peninsula, 30 km SW of Reykjavík, 20 km SE of the Keflavík airport and only 10 km from the town of Grindavík (3500 inhabitants). In the weeks prior to the start of the eruption, the area had been rocked by one of the most intensive earthquake series ever recorded in Iceland. The eruption – sometimes referred to as the Geldingadalir eruption – lasted for 6 months and became a major attraction for hikers. The Mid-Atlantic Ridge runs ashore on the tip of the Reykjanes peninsula and thus the geology of the peninsula is very much defined by the rifting process occurring at the junction of the North American and Eurasian tectonic plates. This includes active volcanism, which had been dormant for nearly 8 centuries; the last eruption in the region having occurred in 1229 AD. The 2021 eruption was effusive and up to 8 craters were simultaneously active. While most eruptions in Iceland originate in shallow magma chambers in the crust (2−3 km depth), geochemical studies indicate that the magma produced in this eruption was derived from a source in the upper mantle, at ca. 17 km depth. The eruption site and the darkish basaltic lava covering an area of 5 km2 is still a spectacular sight and access is easy by several routes. The hike to the eruption site from the road takes about 2 hr. Other regions of interest on the peninsula will also be visited if time allows. The tour will end with a dinner at a restaurant in Grindavík. Arrival in Reykjavík late in the evening.

NOTE: Because of the renewed activity the hiking route will be different from the one originally planned. It will take 2 hrs to reach the new eruption site and 2 hrs back the same route. Participants should be in good physical condition. Although walking paths are being prepared, parts of the hike pass over rough surface and thus very sturdy hiking shoes or hiking boots are essential, as well as warm, waterproof clothing. Temperatures are likely to be in the range 8-12°C.