Permafrost - dynamics and challenges for society into the future

Permafrost regions cover about ¼ of the Northern Hemisphere land surface. They are mostly confined to the land areas surrounding the Arctic Ocean: Siberia, Greenland, Arctic Canada and Alaska. Frozen ground also exists in high-altitude regions around the world, on the Antarctic continent and beneath the seabed in the continental shelves of the polar regions. Landforms characteristic of permanently frozen ground include pingos, palsas, patterned ground and rock glaciers. Much of the permafrost currently in existence formed during the glacial periods of the Pleistocene, although large parts of the Earth's permafrost formed in the second part of the Holocene and during the Little Ice Age. During summer the upper part of the ground in permafrost areas is thawing to different depths – the active layer, depending on snow and vegetation cover, and subsurface conditions. Temperature profiles measured in 10–200 m deep boreholes can be used to reconstruct recent climatic variability and long-term changes in the surface-energy balance. Recent warming in Arctic and mountainous regions creates problems for infrastructure built in permafrost regions and decomposition of organic carbon in thawing soils releases carbon dioxide and methane to the atmosphere. Presentations in this session can cover, but are not limited to, the following topics: 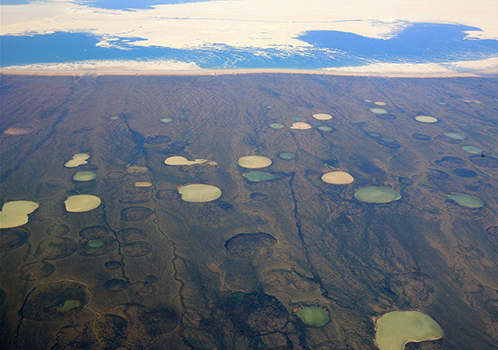