Sea ice covers on average 24 million km2 of Earth's polar oceans, but its extent varies greatly with the seasons in both hemispheres, affected by winds, currents, and fluxes of heat and radiation. In the North, the Arctic Ocean is contained by the coasts of Greenland, Canada, Alaska, and Siberia. In the South, sea ice can expand freely into the Southern Ocean around the Antarctic continent in winter. Sea ice is a key component of the climate system, influencing surface heat, evaporation, radiation, and freshwater fluxes. Since the start of satellite monitoring in 1979, the mid-winter sea-ice cover in the Arctic has declined by 3% per decade, and the minimum extent at the end of summer by 13% per decade. No trend has been observed in the area of sea ice around Antarctica during the satellite era, but record summer lows were recorded in 2017 and 2018. Thickness of ice across the central Arctic Ocean declined from 3.6 m to 1.3 m between 1975 and 2012 and the extent of multi-year ice has diminished. There is little information about ice thickness changes in the Southern Ocean. The length of the Arctic melt season has increased by 10 days per decade since 1979 and a linear relationship is found between reductions in Arctic sea ice and global temperatures. Modelling results indicate that if global warming is limited to 2°C, the likelihood of an ice-free Arctic Ocean in summer will be 10–35% each year a decade after stabilization of the climate. 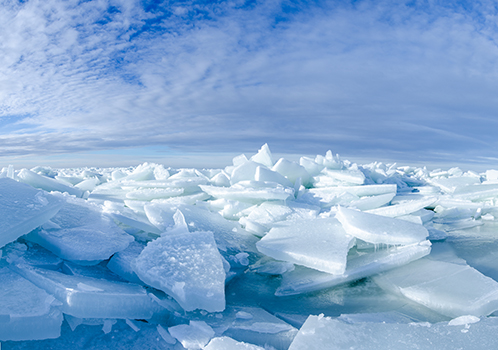